Silver Predator owns a 100% underlying interest in the Taylor Mine that is located in White Pine County, Nevada, 27 km (17 miles) south of the town of Ely and 4.0 km (2.5 miles) east of US highway 50. The property consists of 131 unpatented lode claims, 4 patented lode claims and 5 unpatented mill site claims, subject to a 2% NSR royalty.

Between 2011 and 2013, Silver Predator’s technical team found multiple areas of geochemically anomalous gold-silver mineralization immediately east and southeast of the existing mine and mill. While the existing silver resource is open for expansion in multiple directions, the Company’s primary interest is in exploring the new gold-silver targets.

In 2014, the company drill tested newly identified gold targets located south of the existing silver resource.  These targets were identified through the Company’s 2012 mapping and soil sampling programs as being highly prospective for Carlin-style mineralization based on geologic features and geochemistry. The detailed mapping program completed within the existing open pits found that silver mineralization was confined to specific, but predictable, host rocks and fault zones. The best silver grades were found at the convergence of north-south and northwest-orientated fault zones, structural controls that are repeated at Taylor and typical of other precious metal districts in Nevada, including the northern Carlin Trend.

As the mapping was expanded outward from the resource area, silica alteration, intrusives, and antimony prospects related to N-S and NW faulting were found to the east and southeast of the resource area. This mapping was the first indication that previous mining was focused on only a minor portion of a much larger district-scale precious metals system.

A soil geochemistry program was completed in late 2012 to prioritize target areas. The soil program identified highly anomalous gold, silver, antimony, arsenic and mercury in mapped areas coincident with favorable host rocks, intrusives, jasperoid silica and the patterned N-S/NW fault sets. In 2014, select outlying targets were drill tested to the east and southeast, as well as within the existing silver resource area.  Drilling near the Antimony prospect returned the most significant results while holes testing prospective targets to the south encountered strong alteration but did not return significant mineralization.

The soil results include the following:

The current silver resource remains open along strike and laterally in many areas.  Identified areas for resource expansion, include mineralization along the Argus Fault north and south of the Taylor Shaft. Over 100 historic drillholes from this area, many significantly mineralized, were removed from the resource estimate due to selective sampling and incomplete assay data. An in-fill drilling program could provide the confirmation to add this mineralization to an updated resource estimate.

The “Bulls Eye” target is also an area targeted for resource expansion potential with recently identified higher-grade silver mineralization, both near surface and continuing at depth. Mineralization is controlled by an intersecting series of north-south and northwest orientated faults that are intruded by rhyolite dikes and sills, a prime geologic environment.

There are several other targets and areas identified for further drilling which have the potential to further expand current resources.

In 2017-2018, Montego hired SRK Consulting Reno to update the Taylor silver resource technical report to reflect current metal prices.  The results of this updated resource are summarized in Montego’s January 2019 news release and the technical report is available on SEDAR.

The updated 2018 Taylor silver resource produced by SRK (3) for Montego Resources is summarized in Table 1.

Mineral Resources which are not Mineral Reserves do not have demonstrated economic viability. Inferred Mineral Resources have a high degree of uncertainty as to their existence, and great uncertainty as to their economic feasibility. It cannot be assumed that all or any part of an Inferred Resource will ever be upgraded to a higher category. All figures for tonnage and ounces are rounded to the nearest thousand and may not produce exact sums due to rounding.

Resource Discussion (taken from Montego news release(4))-  There are 481 drill holes, with 93,442 ft of total drilled length included in the 2018 Taylor MRE. The current Project drill hole database has 607 drill holes in the resource model area with valid location data.  SRK excluded 126 drill holes from the resource estimation based on non-standard interval lengths greater than 20 ft, selective sampling, or lack of source documentation. These are the same drill holes that were excluded from the 2013 MRE, after extensive data verification by SPD geologists.

The updated Resource completed by SRK-Reno is based on a silver price of US$17.00. The input parameters used for calculating the Taylor Silver open pit Resource include:

The US$17.00/oz silver price was based upon a 36-month trailing monthly average (June 2018). Table 2 highlights the Taylor resource sensitivity with respect to silver price.

Mineral Resources which are not Mineral Reserves do not have demonstrated economic viability. Inferred Mineral Resources have a high degree of uncertainty as to their existence, and great uncertainty as to their economic feasibility. It cannot be assumed that all or any part of an Inferred Resource will ever be upgraded to a higher category. All figures for tonnage and ounces are rounded to the nearest thousand and may not produce exact sums due to rounding.

The current 2018 resource at the 1.6 oz/ton silver reporting cut-off totals 3,789 Ktons averaging 2.89 oz/ton, and containing 10,995 ounces of silver in the measured and indicated categories.

The Taylor silver deposit is an epithermal, high-silica, low-sulfide replacement deposit in Devonian carbonate rocks.  The deposit occurs as argentiferous jasperoid replacement bodies in the upper Guilmette Limestone. These jasperoid bodies are localized by a combination of steep, north-south and northwest trending structural conduits and preferred host rock units consisting of reactive silty to sandy transitional carbonates. Silver mineralization is often more concentrated adjacent to the felsic dikes and sills commonly found throughout the resource area and elsewhere on the property.  Silver-bearing minerals identified to date, include native silver and the oxides argento bindheimite and argento jarosite, and locally preserved relict sulfides, including acanthite, bournonite, and tetrahedrite.  Gangue minerals, include quartz as jasperoidal replacement silica bodies commonly hosting mineralization, the iron oxides hematite and jarosite, and silver related oxides of copper and zinc.  Overall, the faulting and folding within the resource area define a broad domical (to antiformal) north and south-plunging structure, centered on the Bishop Pit.  The structural and stratigraphic controls resulted in the jasperoid forming large, relatively flat, tabular bodies.  Elsewhere on the property, mineralization occurs in the silicified portions of the Chainman shale and along previously mentioned north-northwest trending structures as well as in jasperoids and silicified structures cropping out in the underlying Joana limestone, particularly near the upper contact with the Chainman.

The Taylor property was a high grade underground silver producer during the late 1880s, and again in the 1960s. The most significant production history occurred from 1981 to 1984, when Silver King Mines produced over 5 million ounces of silver from several open pits. The mine closed due to low silver prices, leaving significant current resources pre-stripped.

Silver King Mines, and its successor, held the property from 1966 to 2000 before the property was acquired by First National Bank of Ely for monies owed. Fury Explorations Ltd. entered into an agreement with First National Bank of Ely in 2006 to earn a 100% interest. Fury Exploration Ltd. was later acquired by Golden Predator Corp. 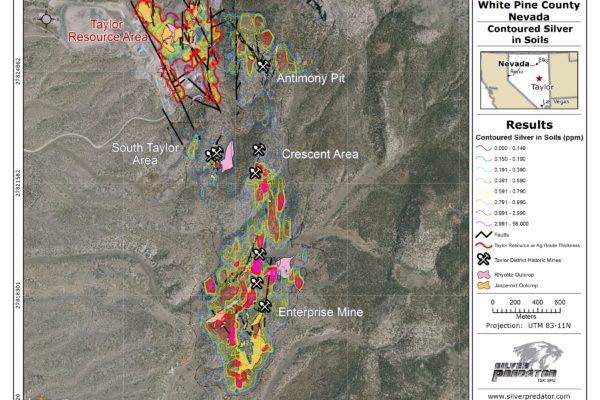 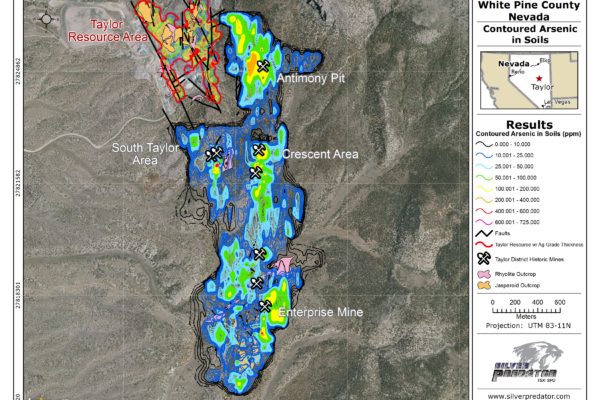 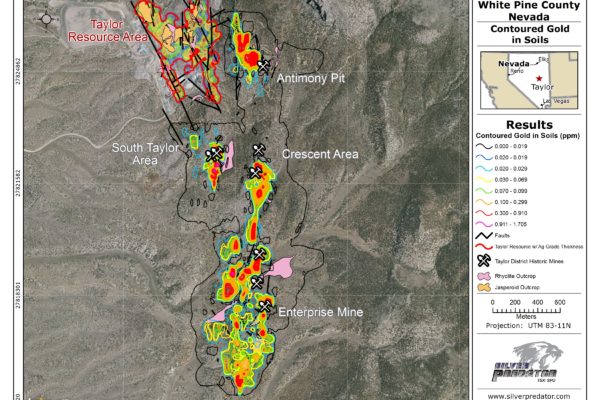 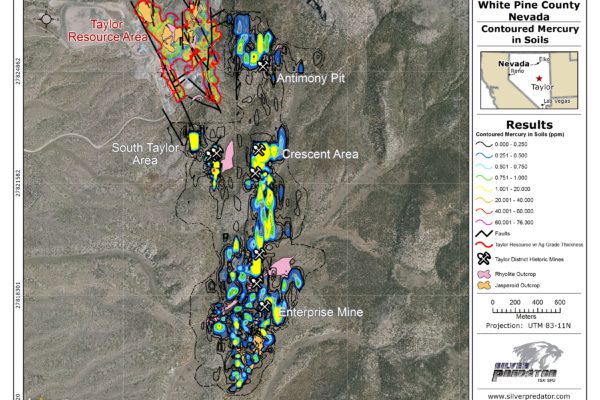 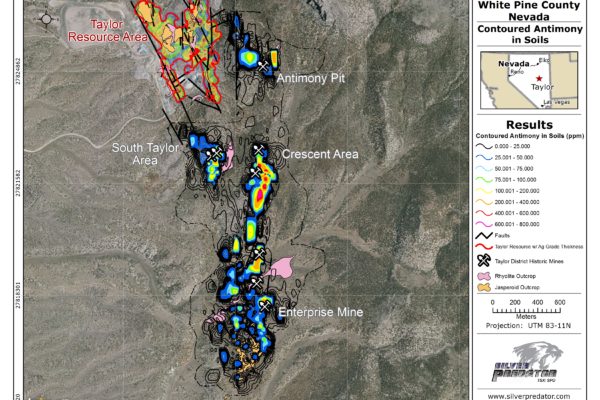 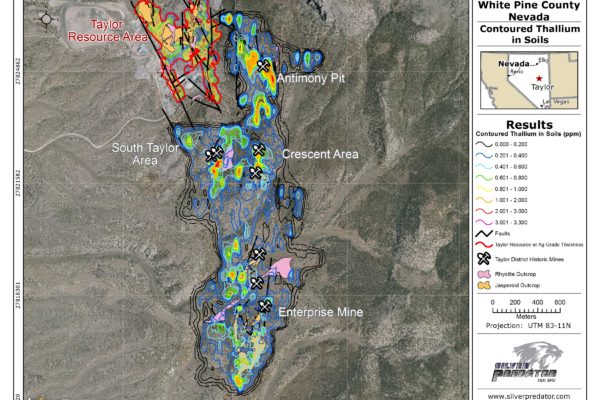 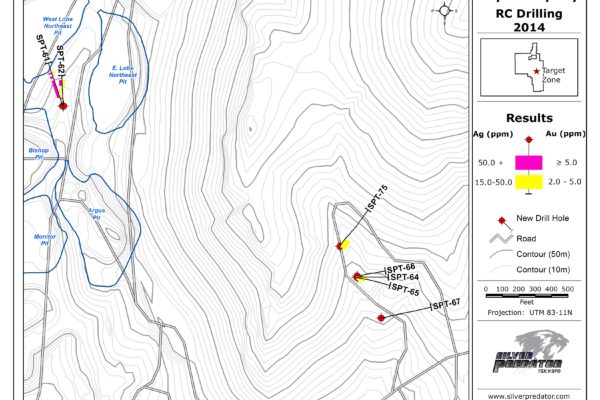 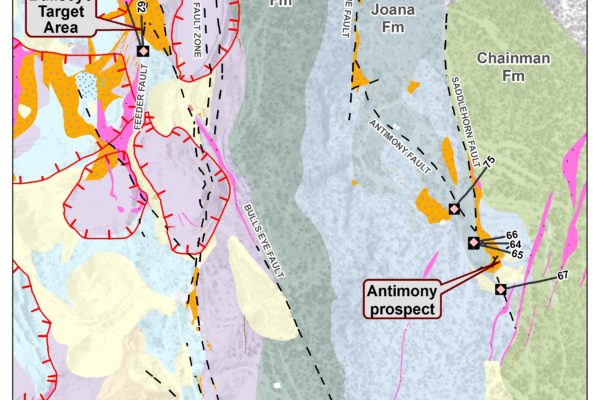